Hydroxyapatite (HA) is a porous synthetic biocompatible material. It favours colonization, vascularisation and significantly reduces the infection or extrusion. The HA is a derivative of coral and is constituted by calcium hydroxide and phosphate, a substance already present in the human body.
The synthetic HA implants are currently in their third generation. The FCI3 synthetic HA implant has a chemical composition like the Bio-Eye implant, even if the electron microscopy scanning revealed a less uniformity and interconnectivity of the pore, and the presence of blind blisters. The FCI3 synthetic implant is famous in many parts of the world over the past 10 years because of the lower price, but problems and complications are similar to the Bio-Eye implant. Other types of implants in HA used around the world include the HA Chinese and Brazilian implants. Although less expensive compared to Bio-Eye, these implants are characterized by contamination, poor porous structure and offer little advantage compared to the other available models.
The most applications of HA and other ceramics in plastic and reconstructive surgery involving the cranio-facial. Their use is typical in the temporary reconstruction of skeletal segments in case of cancer patients with limited life expectancy, in case of supplemental therapy (RT) or resections with palliative intent. The HA is a good filler for small flaws and promotes revascularization and progressive reossification of the treated area thanks to its osteoconductive property. HA is also used as a material for camouflage in maxillofacial defects after trauma or tumors.

The implant is mainly used in enucleation, placed inside the Tenon’s capsule, and it is less used in evisceration. The HA is not suitable for direct rectus muscles suture and always requires coating with synthetic material, autologous or donor sclera. It is poorly shapeable because it is very rough and can cause a direct trauma on tissues with the risk of expulsion. The HA in dense form is difficult to shape and can migrate or extrude. The micro and macroporous shapes available today are much safer and have more osteoconductive capacity. The HA doesn’t bear the load and can completely break.

In enucleation the HA implant is also equipped with a titanium pin which protrudes 2-3 mm from Tenon’s capsule and conjunctiva in order to facilitate the prosthesis movement. Not always, however, the result achieved is satisfactory. The most common problems are: infections transmitted from the pin, its centering failure, the migration implant once sutured and healed but also the infiltration of granulation tissue inside the implant that can cause the extrusion. 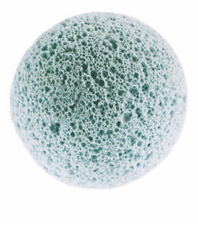