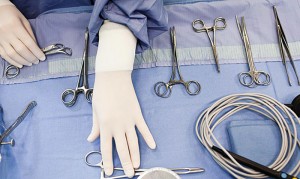 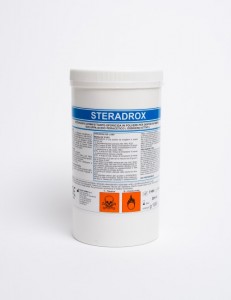 Decontamination is the process used to reduce the bacterial load in work tools and prosthetic aids in order avoid any risk of infection for medical staff. Like cleansing, decontamination removes most of pathogenic microorganisms making the handling of the above-mentioned items safer during disinfection and sterilization steps. It is performed before cleansing both surgical instruments and patients’ prostheses and respectively after their usage and removal. By decontamination we can:

Peracetic acid is used in hospitals and both medical and dental offices for high-level decontamination and disinfection of medical devices. It is obtained by diluting a specific water-soluble powder, which generates a chemical-physical balance that leads to a high germicidal active ingredient known as active oxygen. PAA gets thermodynamically unstable in aqueous solution because of:

Once dissolved in water, most of the powder sits at the bottom, so that the active ingredient can continuously circulate keeping a constant concentration level in the solution. This process generates a heterogeneous balance among different components with various functions:

On the basis of this formula, PAA can be used as:

First decontamination with simultaneous cleansing of surgical instruments and medical devices, according to D.M. 28 September 1990 art. 2 – “After use and right before dismantling and sterilization steps, reusable devices must be immediately immersed in an anti-HIV chemical disinfectant“.

PAA active ingredient acts on lipid membranes, DNA and other cell life essential components, as it interrupts chemiosmotic function of lipoprotein cytoplasmic membranes and transfer into cells, taking advantage of shifts or breaks in cell walls. Its protein denaturant feature may explain its sporicidal action.

This kind of peracetic acid, generated  by the release of hydrogen peroxide from the reaction between sodium perborate and tetraacetylethylenediamine (TAED) dissolved in water, has a high biocidal activity towards spores, viruses – including hepatitis B and HIV, bacteria – like Mycobacterium tuberculosis (TB), and pathogenic fungi. 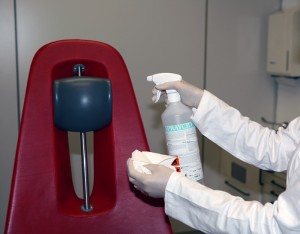 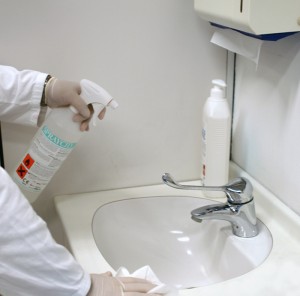 Medical environments are the most exposed areas to the risk of cross infections because of their predisposition to the spread of pathogenic microorganisms. The occurrence of this kind of infections is due to several factors: as an example, the presence of people affected by potentially transmissible diseases, or the performance of those treatments that favor both the spread of infectious agents and the resistance of some other particularly virulent microorganisms.

Treatment rooms are particularly vulnerable to infections because of both the endless passing of patients, visitors and medical staff and the presence of several potentially contaminating biological fluids. Our treatment rooms get disinfected and decontaminated at every patients access with a specific product, which reduces microbial load below attention level and minimizes the risk of the outbreak of the above-mentioned infections.

Disinfection by alcohol solution and chlorhexidine

Thus, it is a hydro-alcoholic disinfectant solution composed of different biocides.

As for germicidal activity, benzalkonium chloride is the most powerful among all quaternary ammonium salts. Didecyldimethylammonium chloride is a quaternary ammonium salt too, but with a slightly different spectrum germicidal activity. Chlorhexidine digluconate is a cationic biguanide, soluble in both water and alcohol. Isopropyl alcohol  and ethyl alcohol belong to those alkyl radicals that, bonded to nitrogen, constitute linear alkyl chains with 12, 14 and 16 carbon atoms.

In addition to a high germicidal efficacy and a broad-spectrum germicidal activity, this product:

The active ingredients of this product have different functions.

They reduce surface tension on the absorption point, so that both chlorhexidine and quaternary ammonium salts can get rapidly absorbed on surfaces with negative charge – like bacteria and proteins ones; plus, they have precipitant, complexing and denaturant effects on proteins, which let alcohols react quickly against microbes causing enzymatic modifications of cytoplasmic membranes and microorganisms.

To make all this happen, it is required the presence of water.

The product we use is a broad-spectrum disinfectant which acts on various pathogenic agents: 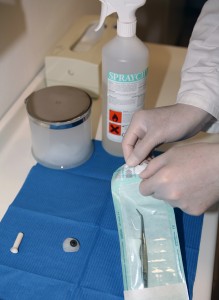 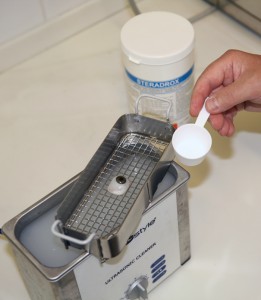 The maintenance of treatment rooms and laboratories implies a strict sterilization protocol involving environments, staff and instruments. All prosthetic aids must be treated too before being fitted on patients by means of a process that ensures the destruction of microorganisms, spores, viruses and pathogenic fungi. This can be obtained by following standard procedures and using specific chemical products approved to this purpose.

These procedures take place at our offices as follows: 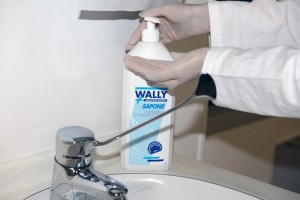 Hand washing is the most effective measure to prevent infections spread. Medical staff hands indeed are the main vehicle of pathogens transmission from patient to patient and from patient to staff themselves. In general, the epidermal layer of the skin is neither smooth nor impermeable, so microbial organisms can lie both above and in it occupying follicles, sebaceous glands and sweat glands. Thus, pathogen agents found in medical environments can be related not only to infected or draining wounds but also to colonized intact skins of patients.

The use of gloves does not replace hand hygiene – whether it is performed by friction with hydro-alcoholic solution or by washing hands with water and antiseptic soap. It is expected to prevent the possible contact with blood, mucous membranes, non-intact skin or other potentially infectious materials. Gloves are disposable, so they have to be removed immediately after a patient treatment and never reused.

Decontamination is used to quickly destroy occasional flora, reduce microbial load in the resident one and prevent the so-called “hospital infections”. The reduction of hands bacterial load can be obtained by washing them with an antiseptic substance – like alcohol, chlorhexidine, chlorine derivatives, iodophors, etc. – directly applied on the skin , or by rubbing hands with hydro-alcoholic solution only if already washed with basic water and soap.

The antiseptic liquid soap we use in our clinics is an ortho-phenylphenol and triclosan-based solution, suitable for both hospital and outpatient environments staff disinfection. Very effective against both gram-positive and gram-negative bacteria, it combines fast disinfection with deep cleansing. At 100% dilution, 1 minute contact time and 20° C temperature, according to European standard CEN / TC 216 EN 1500, it shows bactericidal activity against:

Whereas, at 100%dilution, 5 minutes contact time and 20° C temperature, according to European standard CEN / TC 216 EN 1040, it shows the same kind of activity against: